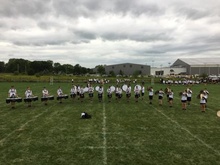 The Hawkeye Drumline season begins with the Hawkeye Marching Band Camp which begins one week prior to the start of school. These rehearsals teach the "HMB" style of marching, playing, music, and shows.

Here, the drumline holds auditions and sets the line. A lot of time is spent in sectionals, breaking down music and preparing for the season. 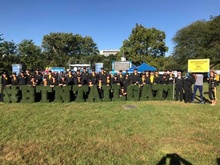 Throughout the year, the HMB is called upon to play at a few pep-rallies. These include live TV appearances, such as ESPN's College Gameday and BTN Tailgate, as well as University-organized events, such as the annual Homecoming parade and pep rally.

Approximately two hours prior to kickoff at each home game, the Hawkeye Drumline performs a lot show in front of the Rec Building (Indoor Track Facility), outside the northwest corner of Kinnick Stadium. Here they will perform warm-ups, grooves, halftime music, and The Series. The Lot Show is open to everyone.

An hour and fifteen minutes prior to kickoff at each home game, the Hawkeye Marching Band performs a pregame concert in the Recreation Building. The show consists of music that will be played during pregame and halftime that day. It is designed as a pregame pep rally and is free and is open to the general public.

The Boom and Pregame

20 minutes prior to kickoff, the Hawkeye Drumline performs the traditional "The Boom" cadence sequence while the HMB runs-on to the field. The band then performs several of Iowa's fight songs such as On Iowa, the Iowa Fight Song, and Roll Along Iowa. After this, the band plays the team onto the field and performs the National Anthem.

Of course, the Hawkeye Marching Band performs at halftime, featuring a new show for almost every game. Recent halftime favorites include HMB TV, Superheroes, and a Beatles show that included forming a hand to wave to patients in the Stead Family Children's Hospital. With music from a variety of genres and eras, the HMB's halftime performances appeal to fans of all ages. 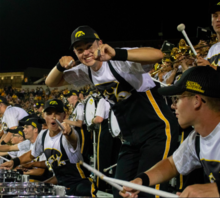 The Hawkeye Marching Band continues to play in the stands and support the team during games. HMB "stand tune" favorites include the Imperial March, drumline grooves, trumpet and trombone cheers, and of course, the fight songs. 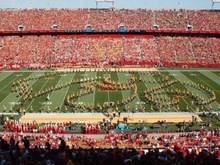 Each season, the Hawkeye Marching Band travels to one regular season away game. There, both the HMB and the home band perform at pregame and halftime. It is also common for other bands to do the same in Iowa City. 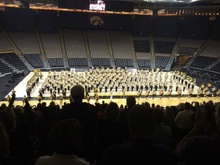 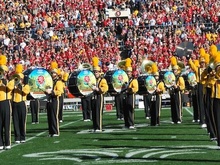 If the season goes well and the football team receives a bid to a bowl game or the Big Ten Championship Game, the HMB gets the chance to travel with the team to cheer them on! The band spends several days in the area performing at pep rallies and the game.